there's nothing in your cart yet!
you can head to our shop to change that!
Product is not available in this quantity.

welcome to the family! we'll be sure to keep
you in the loop of all our comings and goings!
our bad! something went wrong while submitting the form.
would you mind trying again? thanks so much! 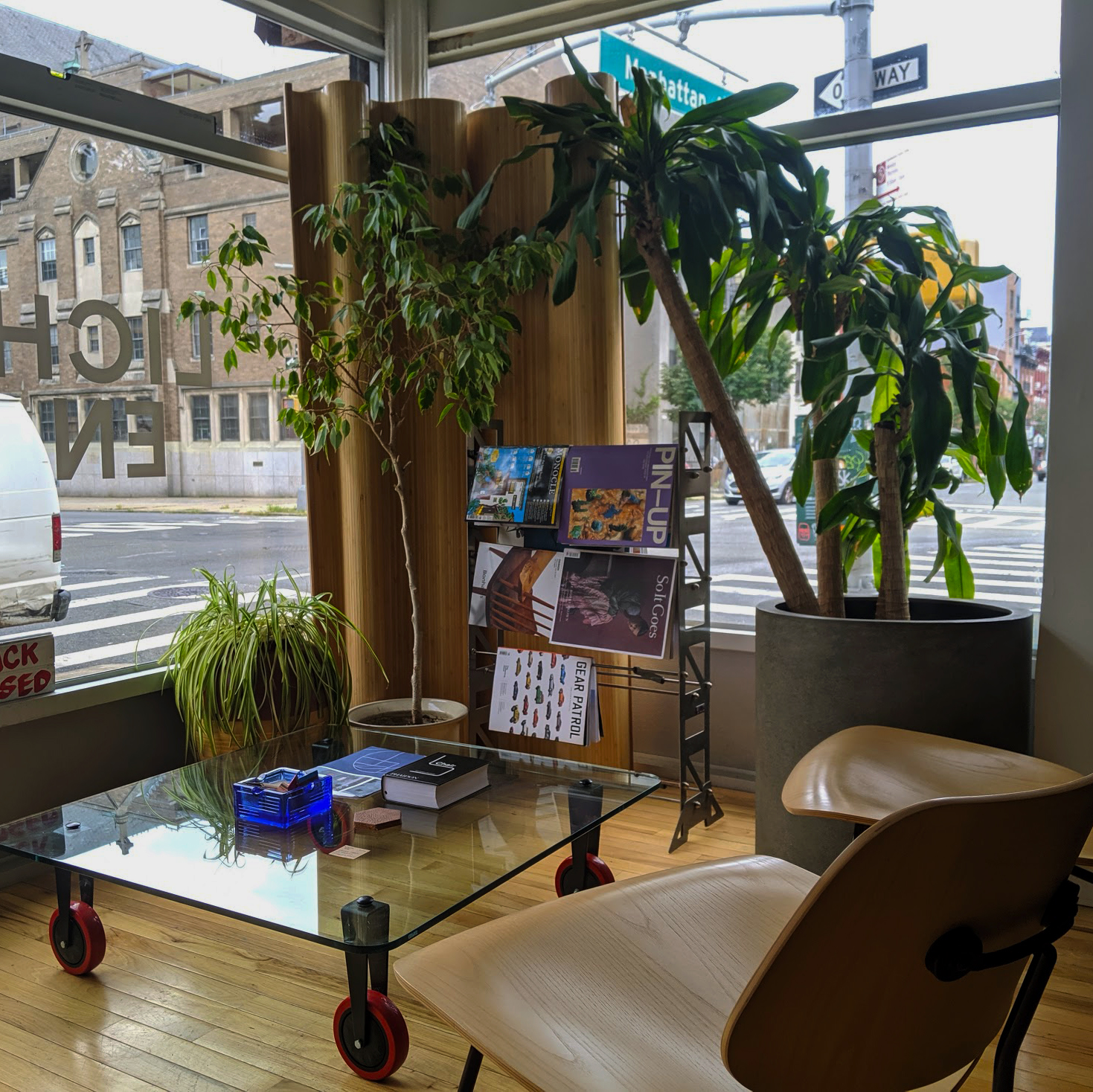 As businesses have sought to cater to millenials, more and more companies have tried to sell their products under guises such as “experiences” or “communities.” However, few have actually accomplished offering anything more than capitalism. Lichen is one of the few stores in New York that has succeeded in providing a space that actually feels like a community. Lichen sells vintage furniture and a great cup of coffee in East Williamsburg, but it also is a hub for a community whose interests and professions span from art, fashion, music, design and further. Friends and family frequently congregate on Lichen’s Eames chairs to sip coffee and converse. Run by Jared Blake and Ed Be, Lichen is one of Brooklyn’s most exciting retail concepts. We sat down to speak with them about the space and their favorite furniture but the conversation quickly free flowed from Wendy’s burgers to gentrification to a Lichen hotel.

Ed: Mine is the Eames DCM chair, the side view of that, the first time I ever saw it, I was just caught by the profile, and it stuck with me. That’s what made me start to appreciate furniture.

Jared: It's downstairs actually, it's a bikini wire Herman Miller Eames chair. I saw it in Soho on Crosby at Twentieth Century Artifacts that has now moved.

For somebody just getting into furniture where do you recommend them to look to learn more?

Jared: Honestly, there's not a lot of precedent, it's curation. It's all a Google search a way, it’s just what you're looking for and where you are when you find it. All the info is out there, but the best source is a book. You gotta open a book, say that chair looks cool and you start researching that chair. I don’t know where it comes from, but it was here before us and will be here after us. Google it, Google Herman Miller and look what they've made. If you aren't curious about it, you won't find anything more about it. Go down a rabbit hole. You've never left school, we're all still in school and some of us are putting gum on the chairs and some of us are paying attention. It’s funny, half these chairs in the store are school chairs,

Ed: Especially Eames and Herman Miller cause they got contracted by schools, they were supposed to be affordable, now they aren't.

Jared: Same thing with college, other countries are trying to actually make it affordable, but here they're just a debt sentence. Same things with the chairs, $800 for a chair that's just debt

Sleeper pick for furniture, designer or item? Who or what never got the attention it deserved?

Jared: It's like Wendy's! Nobody talks about Wendy's! It's been out here doing good shit, it's lit on Twitter, Junior Bacon Cheeseburger! Anyway Steel Case is never talked about. It's like Herman Miller but never became a luxury lifestyle. They’re just Michigan ingenuity so it's not as expensive.

There's certain sensibilities about steel case that there's a beauty to it. If you put your shit on it in your home it feels so much better. Herman Miller there's already a story, but with Steel Case there's no story. They don't attribute it to any designers so it's your own story.

Ed: We got into Seel Case for reasons that we got into Herman Miller but there's no real culture significance. There's no aesthetic in Steel Case. They were just thinking function, they should make a vehicle. Sometimes they took chances. Remember that lounger? There was some sex in that.

What impact do you want Lichen to have on the community?

Jared: Whatever our community is, it's a positive impact. Just lately I've been thinking about how certain people are givers or takers. I think especially being in a store front it's easy to sense who's giving and adding, and there's pros and cons to both, but we just want what happens here to push outward in a giving way. Just with gentrification and everything. Like Starbucks there's a service to it, but I don't think it helps in anyway. We want to help. A bench out front is the least we could do. The bench is for anybody in the community to sit not just for customers. But we do give out money to people who come through and are like “hard times”. We just want a positive impact in whatever capacity. We don't want to be a taker. We never want to be the people that want to take the last slice, we want to be the first to offer it. Are you going to hold the door open or not?

What's the craziest Lichen product extension you'd want to do?

Jared: A Lichen hotel, I think we know what people want.

Ed: Is it a hotel or more of a lounge? You don't gotta spend money.

Jared: It would be the Lichen version of a Soho house.

Ed: That doesn't charge for anything.

Jared: It's a space and a membership and events.

Jared: Empathy, it doesn't make sense for a bigger design project but for normal people, trying to be sensitive to size and price.

What does empathy look like aesthetically and how does it make good design? Is it recognizable enough to have certain characteristics. You know it's Snarkitecture cause they have a particular look and it's obvious so we're just trying to develop what that is.

The color green we're trying to develop that more into a visual trait. Something tangible enough that you can shop it around and people will say that’s a Lichen thing, but it will all be tied back to empathy and the general feeling of empathy. It's like what does love look like. Aalto used natural curves and the color yellow in his hospitals to be positive and create empathy with certain characteristics.

Ed: Also sunlight plays a big part. If you compare to Bi-Rite, Bi-Rite is just all white lighting. Same with Coming Soon, all our photos are shot with natural lighting.

Jared: It's like plants, the plants are daytime for everyone.

Ed: It's an organic feeling